From the early skyscraper era of the late 19th century through the modern skyscraper era that dawned in the 20th century, Toronto’s tallest buildings have always been found in the heart of the city in what has become the Financial District. Now, two contenders for the tallest building in Canada are under construction in Toronto, neither located in what has traditionally been the tallest and densest area of the city. North of the Downtown Core, the Bloor-Yorkville skyline will soon be home to possibly the tallest building ever constructed in the country, with work now unfolding at the intersection of Yonge and Bloor for Mizrahi Developments‘ The One. 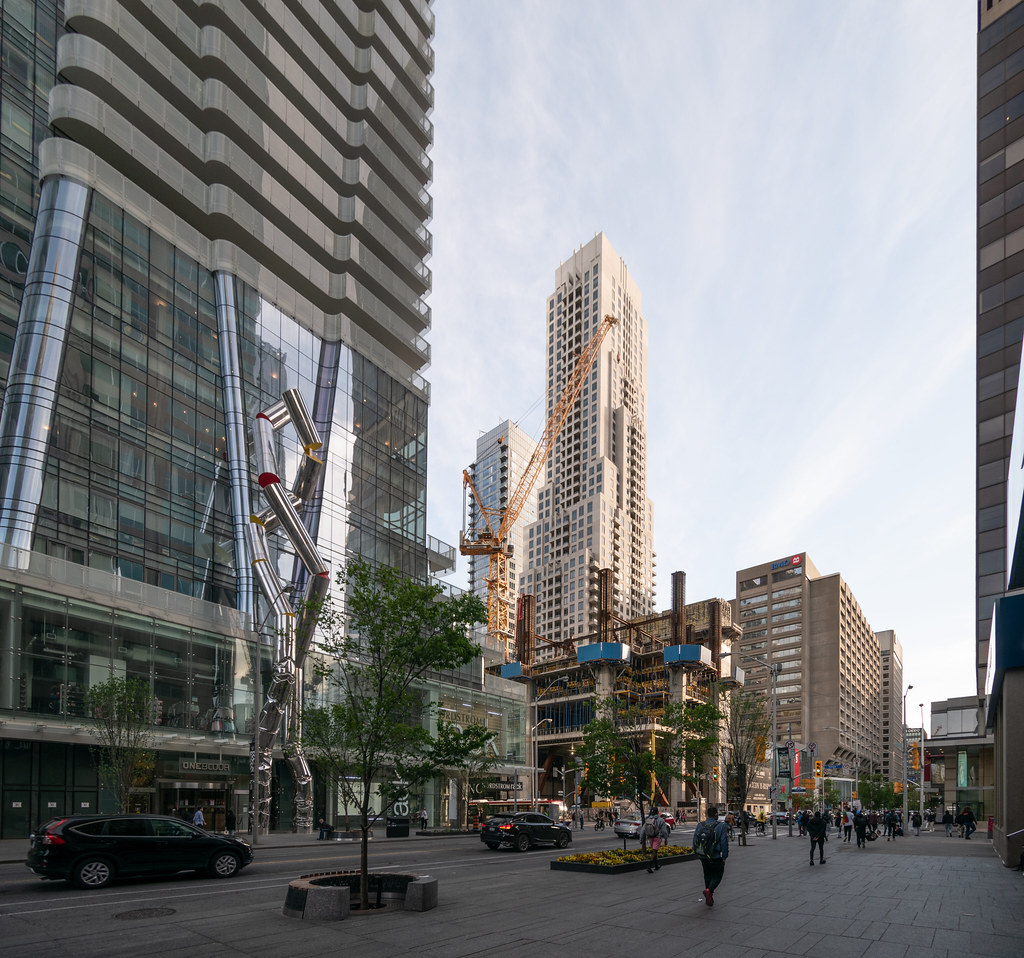 Looking southwest to The One, image by Marc Mitanis

Designed by UK-based architects Foster + Partners with Toronto’s Core Architects, the project is approved at 85 storeys and a height of 308.6 metres, taller than the current title holder of Canada’s tallest building, which since 1975 has been First Canadian Place at 298 metres. While an even taller building recently began construction south of the Financial District—the 312.5-metre SkyTower at Pinnacle One Yonge—Mizrahi Developments have applied for a height increase for The One that would see it top off taller, at 94 storeys and 338.3 metres high. 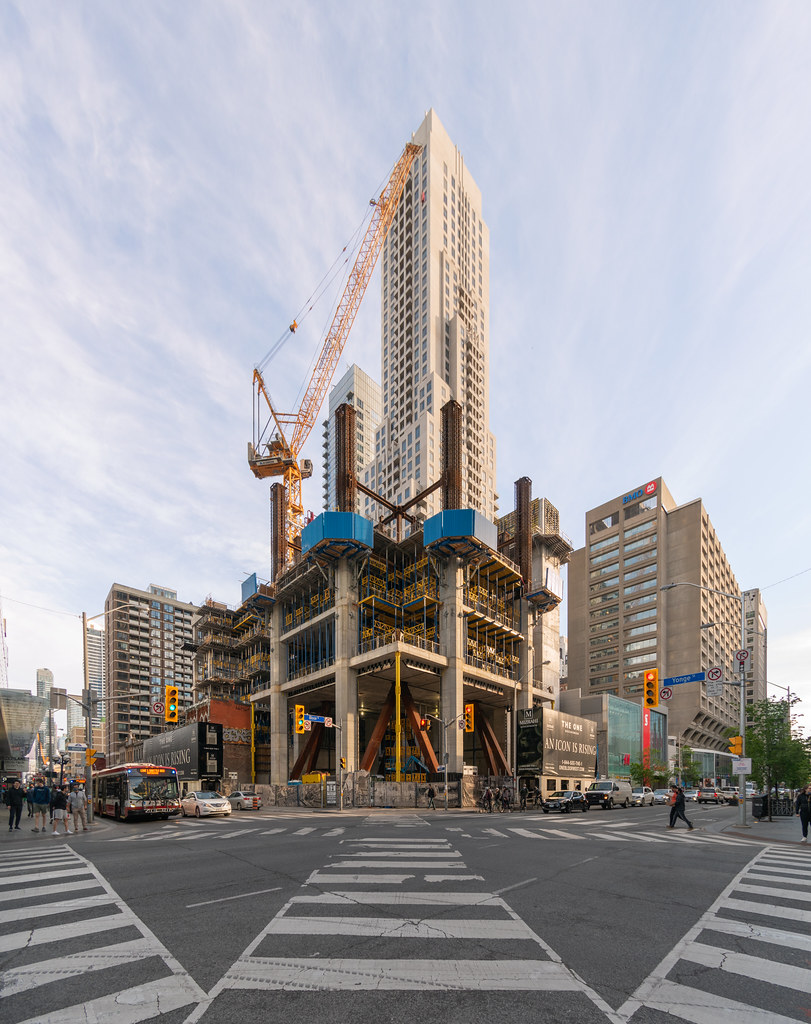 Looking southwest to The One, image by Marc Mitanis

We’ve been covering the project regularly as more of its complex engineering is revealed in the form of a hybrid exoskeleton superstructure anchored by a series of eight 40-tonne steel-core, concrete-encased supercolumns. Over the last month, the speed of construction has noticeably increased, and the biggest milestone since our most recent update has been the removal of the central crane, a specialized Link-Belt TG2300B that was delivered by New Jersey-based Cornell Crane & Steel in 2018. 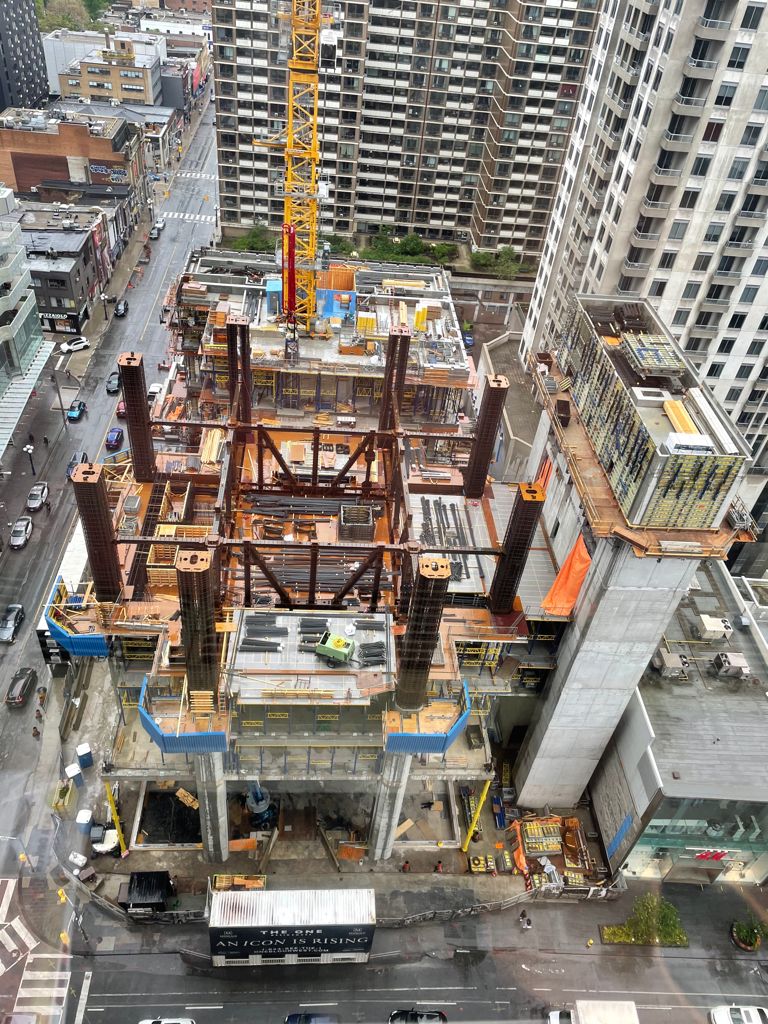 Looking south over The One, image by Forum contributor thaivic

The removal of the crane—no longer required as the project’s heaviest lifts were early in the process—necessitated a square void in the floors formed so far; voids which have since been filled in with concrete. You can see the shoring holding up a recently poured section where the void in the third floor slab was, below. Once the concrete has sufficiently cured, the shoring will be disassembled. 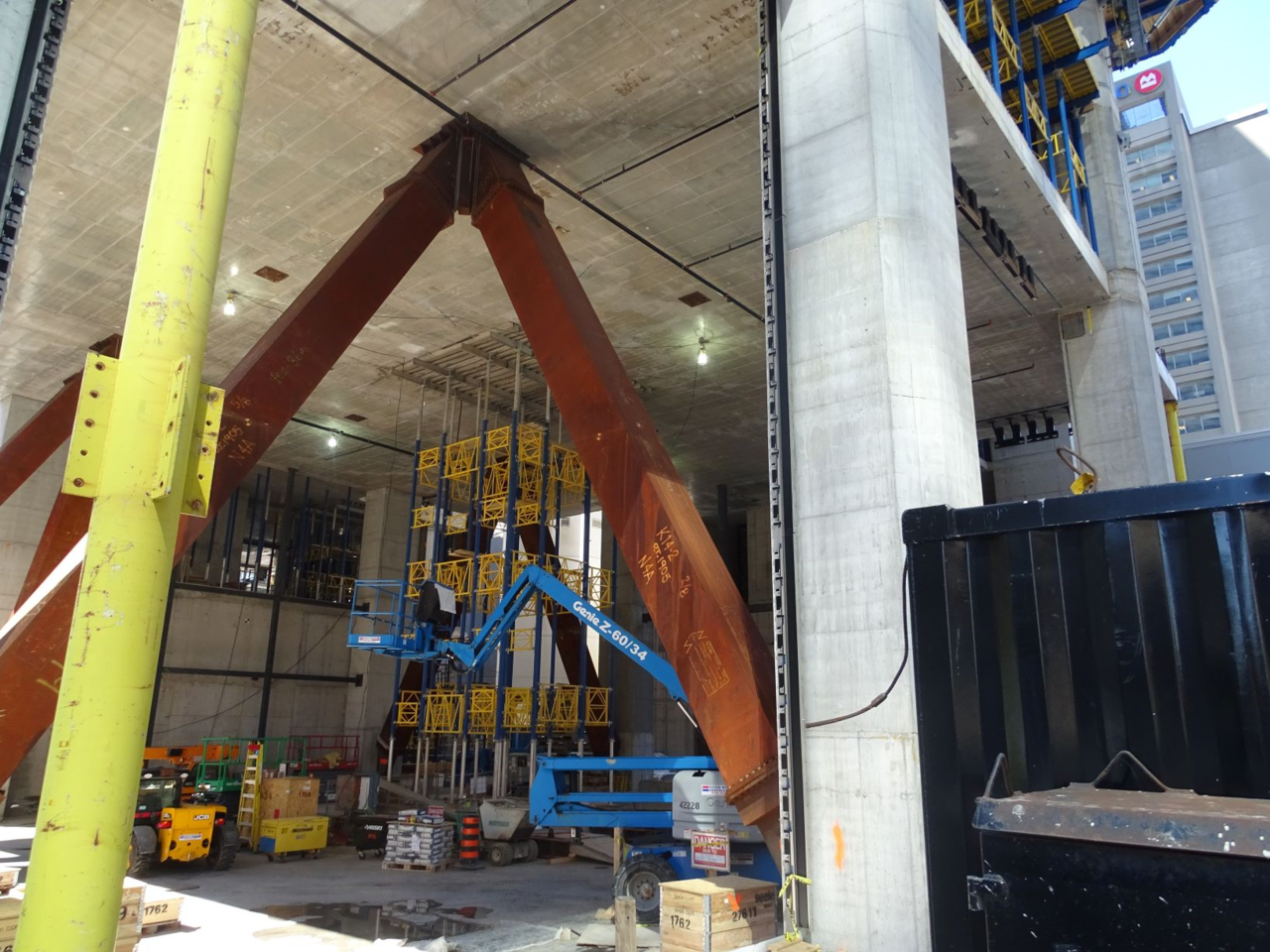 Former crane opening being filled in at The One, image by Forum contributor Northern Light

Last month also marked a significant turning point in construction speed, being the first month where forming was carried out on multiple above grade levels. Floor numbering for podium levels takes into account the extra-double-high flagship retail space, so the floor currently taking shape above is the fifth. This floor will house the base of the building’s central “floated” elevator pit, allowing for the dramatic open retail space below. This fifth floor elevator pit is to be constructed atop a concrete pad that will be poured within a grid of steel beams. 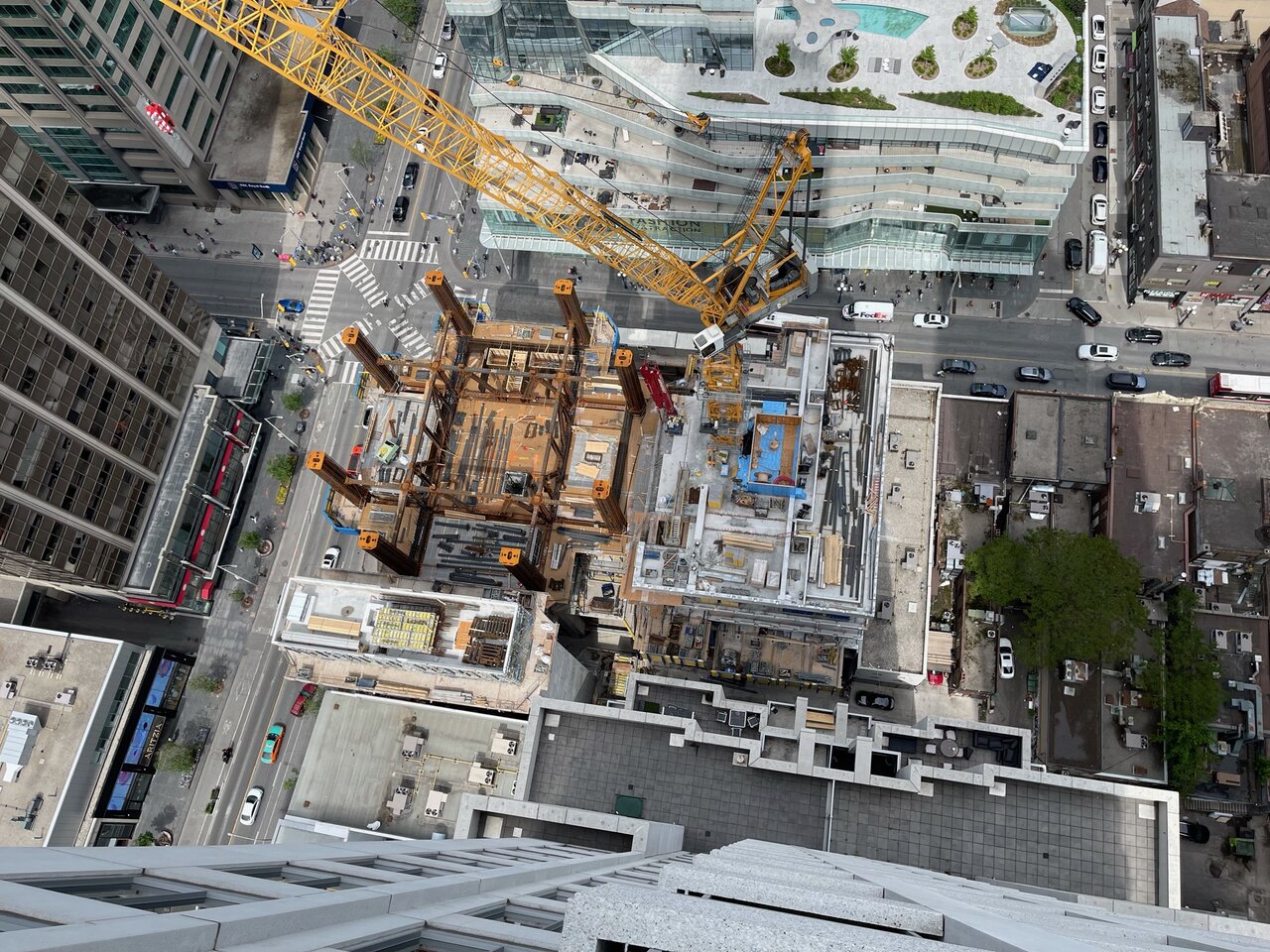 Looking east over The One, image by Forum contributor Benito

Flanking the tower, a pair of podium volumes provide access to the hotel and residential levels above the building’s 12-metre-high ground-floor retail space. The south podium is quickly approaching structural completion, now at its full height above Yonge Street. To the west, the Bloor Street podium—a much smaller footprint containing elevators that connect to the sixth level residential sky lobby—is quickly approaching its final height, rising to the level of the steel skeleton that marks the base of the upcoming tower floors. 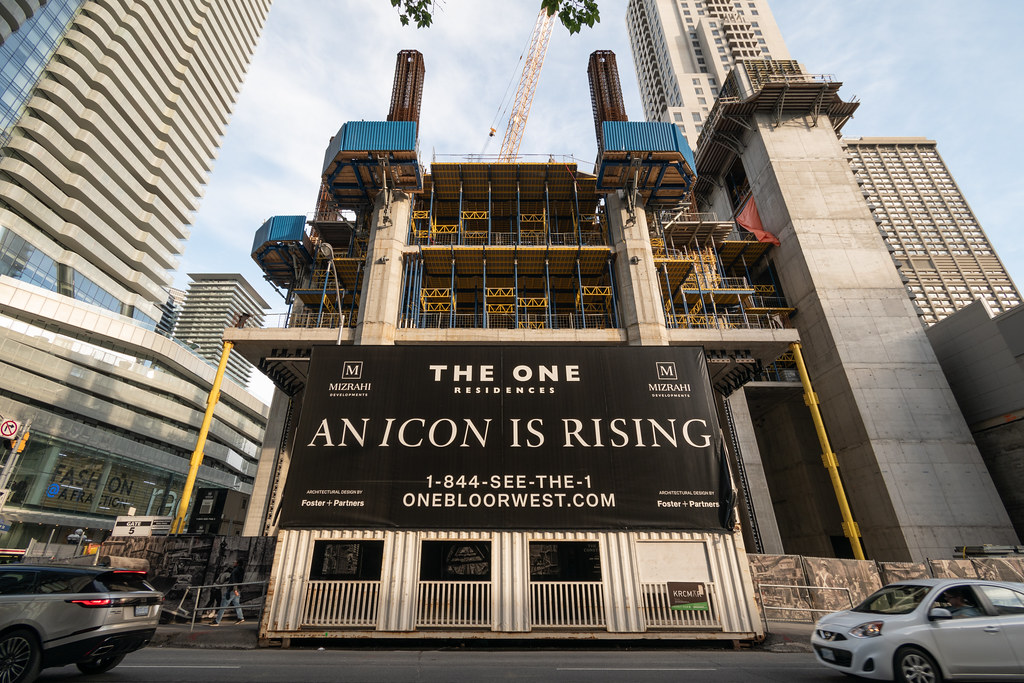 Looking south to The One, image by Marc Mitanis

At ground level, hardware to secure the massive glass panes around the flagship retail level is now being installed. 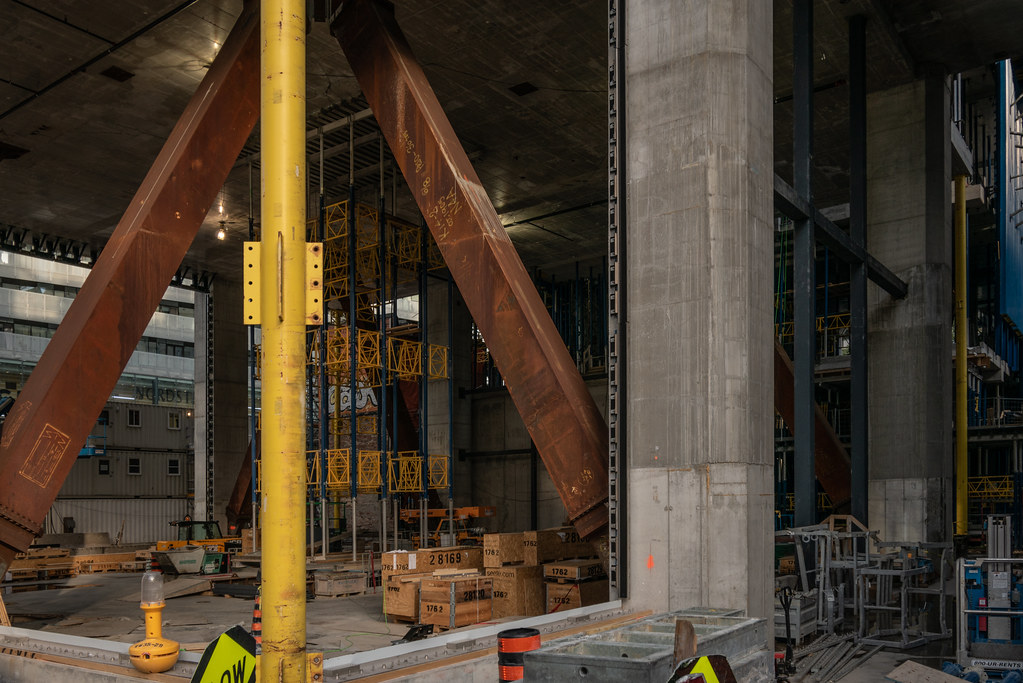 Retail space and cladding framing at The One, image by Marc Mitanis

Depending upon the outcome of the application to increase The One’s height, it remains to be determined if the tower will be a short-term or longer-term holder of the title of Canada’s Tallest Building, though the tower’s dramatic design and its prominence amongst its surroundings are sure to make it an iconic part of the skyline for generations to come either way.

94-storey version of The One, Mizrahi Developments

You can learn more from our Database file for the project, linked below. If you’d like to, you can join in on the conversation in the associated Project Forum thread, or leave a comment in the space provided on this page.

This Privacy Policy is applicable to Mizrahi Developments (“Company”) and sets out our policy on the gathering and use of information on this site and our other sites (collectively “Sites”). The Company is committed to providing safe web sites for visitors of all ages and has implemented this Privacy Policy to demonstrate our firm commitment to your privacy. The Company complies with Canadian Federal and Provincial privacy laws and regulations including the Personal Information and Electronic Documents Act.

There may be links from our Sites to other web sites; note that this Privacy Policy applies only to our Sites and not to web sites of other companies or organizations to which our Sites may be linked. You must check on any linked sites for the privacy policy that applies to that site and/or make any necessary inquiries in respect of that privacy policy with the operator of the linked site. These links to third party websites are provided as a convenience and are for informational purposes only. The Company does not endorse, and is not responsible for, these linked websites.

Although you are not required to register to access our Sites, you may be asked to provide us with personal information when you visit certain sections of our Sites. Your use of our Sites signifies your acknowledgement and consent to our Privacy Policy. If you do not agree to this Privacy Policy, please do not continue to use our Sites. Your continued use of the Sites signifies your acceptance of these terms and any changes in effect at the time of use.

Personal Information is information about you that identifies you as an individual, for example, your name, address, e-mail address, or telephone number.

We collect information that you voluntarily provide to us through responses to surveys, search functions, questionnaires, feedback, Tell Your Story forms and the like. We may also ask you to provide additional information such as your e-mail address if you want to obtain additional services, information, participate in a contest or to resolve complaints or concerns.

New floors. Precise angles. The beauty of The One

Up we go, an amazing scene up high as more concret

“The best thing about the future is that it come

“Life isn’t a matter of milestones but of mome